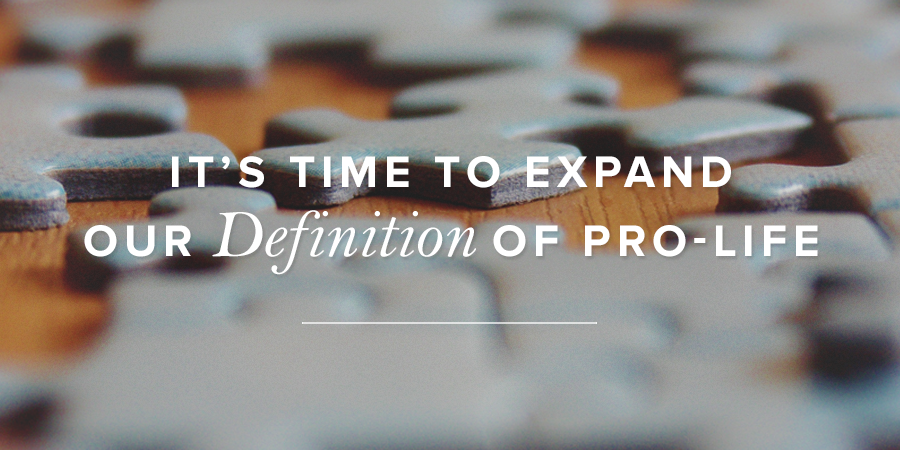 In light of the weekend’s deplorable events in Virginia, I’m reposting this article, originally published here. Christians, being truly prolife is much, much bigger than being against abortion . . . .

As I sit here observing the aftermath of Election 2016, I can’t help but reflect on the impact that potential Supreme Court nominations had on the race. Within the Republican Party, and specifically the traditionally conservative evangelical community, we are left with a gaping rift, one that won’t be quickly sutured by calls for unity and #comehome.

“It’s the economy, stupid,” was the phrase coined by James Carville, campaign strategist for Bill Clinton during his presidential bid against George H.W. Bush. The phrase signified the notion that a single issue—the economy, in Carville’s opinion—trumped every other issue in the mind of the American voter. For many evangelical voters however, as demonstrated in every presidential election in my memory, that overriding issue can be summed up in one word: abortion.

It’s an ugly word, as sterile and slicing as the procedure itself. Sure, many evangelical voters have cited other issues affected by Supreme Court appointments during this gaudy circus of an election cycle. But when it comes down to it, when you get to the brass tacks of why a majority of evangelical voters are willing to support a less-than-admirable candidate it comes down to one thing: babies.

Over 58 million and counting in the past forty-three years in this country alone.

It’s tragic. It’s heartbreaking. Let’s just be clear about that right off the bat.

But Supreme Court justices? Anti-abortion legislation? Protecting the unborn? These are all noble causes, and ones that we should indeed champion. But my dear friends, readers, women who are committed to drawing worldly eyes to the loveliness of Christ and the beauty of the gospel . . .

END_OF_DOCUMENT_TOKEN_TO_BE_REPLACED

Who knew that books could be so useful in double-chin removal? 😂😂😂 Remote workers all over the world, that’s who. So, I’m curious: What books are propping up your webcam this week? 🤓💻📔 #workfromhome #covid_19 #booklove
A little “special music” from our family worship time this morning. (This hymn is public domain so we felt it okay to share.) “A Mighty Fortress” is a hymn for the ages and provides comfort and boldness in troubling times. This is Michael, Seth, Jonah, and me, with the littles and Ollie providing, um, ambient noise. A mighty Fortress is our God, A Bulwark never failing; Our Helper He amid the flood Of mortal ills prevailing: For still our ancient foe Doth seek to work us woe; His craft and power are great, And, armed with cruel hate, On earth is not his equal. Did we in our own strength confide, Our striving would be losing; Were not the right Man on our side, The Man of God’s own choosing: Dost ask who that may be? Christ Jesus, it is He; Lord Sabaoth His Name, From age to age the same, And He must win the battle. And though this world, with devils filled, Should threaten to undo us, We will not fear, for God hath willed His truth to triumph through us: The Prince of Darkness grim, We tremble not for him; His rage we can endure, For lo! his doom is sure, One little word shall fell him. That word above all earthly powers, No thanks to them, abideth; The Spirit and the gifts are ours Through Him who with us sideth: Let goods and kindred go, This mortal life also; The body they may kill: God’s truth abideth still, His Kingdom is forever. noise. #itsstillsunday #amightyfortress #familyworship
Keeping the economy rumbling along, one latte at a time. #drivethrudate #drivingisthenewdating
Not canceled: Saturday morning coffee with hubby and magazines. 💙☕️📖
Today—amid all of the Corona-madness, some pretty big news launched in the Elliott home. In just a little over a month, I will be leaving my position at Bethel University to join the staff of Revive Our Hearts as Managing Editor. While I am over-the-moon excited to get started, I can’t do it without your prayers and support. Would you consider partnering with me? See the link in my bio for a video where I share my heart for the ministry. ❤️🧡💛
A Monday among Mondays—sporting the “We have to completely change our lives for how long?” look, just like the rest of you, I’m sure. Today was a stressful day at work—full of uncertainty, full of trying to help my team get on track, full of trying to figure out best practices for remote work with no practice and very little best. But you know, I can look back at today and think of a dozen ways God was faithful. He was ever-present as I searched three stores for toilet paper, as I sat in my mostly-abandoned office (which, incidentally, contained fewer people than my home) trying to figure out how to do two-and-a-half jobs, and even when I was packing up to leave at 6:15 and got the email that a person two floors below who had been in the building today called to say they have had direct contact with a confirmed COVID-19 case. This morning I read Exodus 18, and I love the wisdom Moses received from his father-in-law: “Moses' father-in-law said to him, "What you are doing is not good. You and the people with you will certainly wear yourselves out, for the thing is too heavy for you. You are not able to do it alone.” (vv. 17-18 ) These things we are going through right now? They are too heavy for us. We cannot do this on our own. But we have each other and a God who, when our sin was too heavy for us, gave His Son, who carried our burden to the cross that we might have life. So in the face of fear and irritation and disappointment and unprecedented disruption to our lives, let’s honor Him by caring for each other well and by diligently doing the work He puts before us. And please, let’s not try to do it on our own. You heard the man; it’s not good. But God is.

Want to see all of my True Woman blog content in one place? Check it out over at the Revive Our Hearts site: https://www.reviveourhearts.com/authors/laura-elliott/posts/